This article describes the Scenario component and its properties.

Scenarios provides a convenient graphical interface for a user to save and load different sets of data from spreadsheet ranges specified by the project desinger into a running Squirrel project.

When placed on the canvas the scenario component adds two buttons:

and when these buttons are pressed the end-user is presented with a combination of dialogs to allow them to save, load and edit their scenarios: 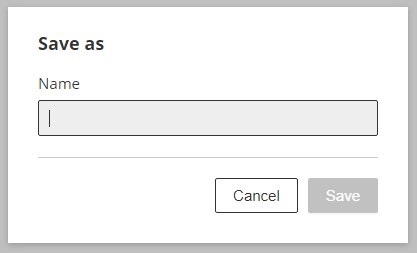 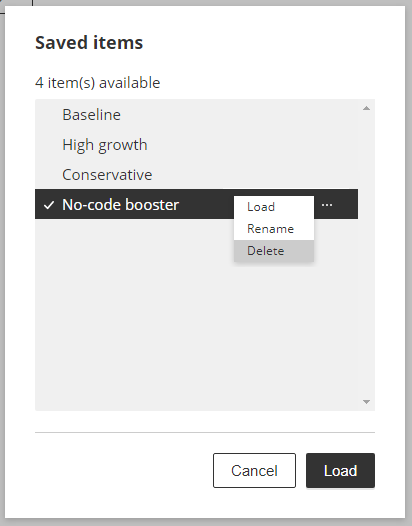 Select Scenario from the Controls category of the component library. Move the mouse over the canvas and click to add the component to your project:

This property drawer controls the overall function of the Scenario component. Initially it looks like this: 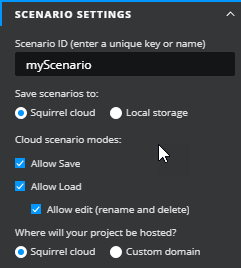 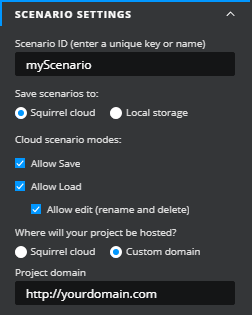 The BUTTON GROUP STYLING properties are used to control the appearance of the save and load buttons on the canvas. The top section controls the options which are common to both buttons:

Each of the buttons can be independently styled by expanding the “SAVE BUTTON” and “LOAD BUTTON” sections to reveal the formatting options:

The DIALOG STYLING properties are used to control the appearance pop-up dialogs which are presented when the end-user chooses to save or load a scenario: 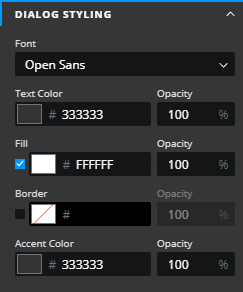 These properties specify the spreadsheet ranges which will be saved as part of the scenario.

Note that if a spreadsheet cell which is saved as part of a scenario contains a formula its values will be saved as part of the scenario and not the formula. This means that formulas will be overwritten with values when loading back saved scenarios. As a result it is recommended to avoid specifying ranges which contain spreadsheet formulas.

Each scenario can consist of many saved ranges, new ranges can be added by clicking on the + icon at the top right of the list of ranges. 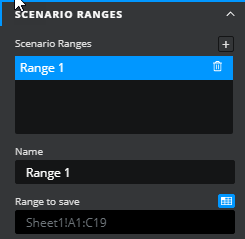 Last Updated: 8 months ago in Components
Was this article useful?